UPDATE: Reposting because the brilliant Jean Hessel just found another contrafactum (another text set to this same melody) on Youtube! Dos is nicht mein arbeit (Dos iz nisht mayn arbet), sung by Leo Fuchs in 1930! Thanks, Jean! Anybody want to take a whack at taking down the words? If I get them I'll post them here!

You can hear (and buy, if you like) our recording of Di Firme Boymvol here: 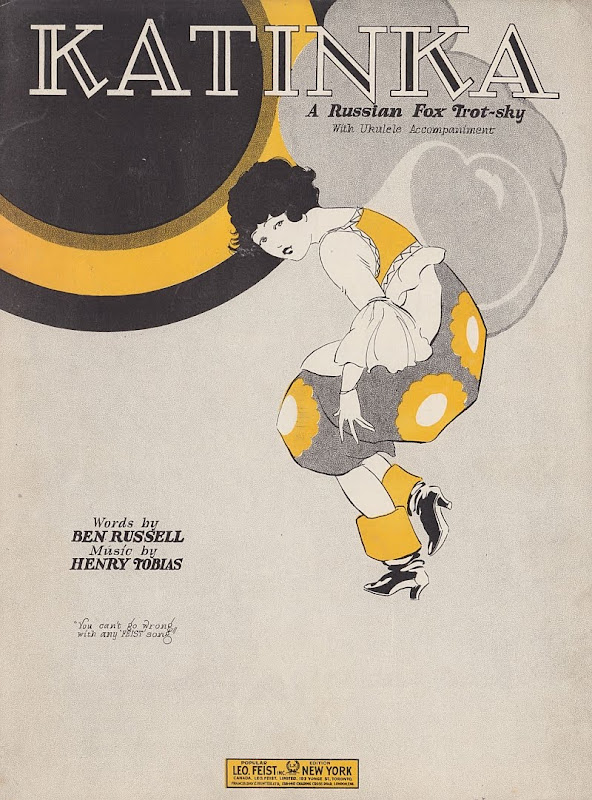 One of my lost Zhelonek songs, Di firme Boymvol, had the intriguing direction: "To be sung to the melody of Poktsro Katinge." I asked Yiddishists and Slavic professors, and all protested that these were not real words in any language. Stymied.

One night I remembered that P and F are virtually interchangeable and flashed on FOXTROT - I looked online for foxtrots called "Katinge," no luck, then flashed: KATINKA. Bingo! On the sheet music, Katinka is subtitled A Russian Fox Trot-Sky.

The 1926 song, which in typical American fashion makes ignorant fun of Russia, sailed east across the Atlantic and became very popular there; on youtube you can find translations of this song in Finnish and Greek. But here is the original American version, George Olsen's 1926 recording of Katinka Foxtrot. I hope you enjoy the lyrics and the Russian scat singing later in the song. Around my place we now have a terrible earworm and are going around singing: "But she went nutsky for the hey, hey, oy, vey,"

So FYI here's the recording I transcribed:

Here's the animated video I did of this ridiculous song.

Here's the link to the sheet music - and I'll throw in "Katinka a Fox-Trotsky" for free on request in case you want to sing it in English:

The first thing I did after I heard Katinka was order the sheet music (see above). Then I started to wonder about this composer Henry Tobias. The first question I ask myself, was he Jewish? This book, which I also just ordered, answers that question: Music in My Heart and Borscht in My Blood: An Autobiography by Henry Tobias. He was a tumler (fool, noisemaker) and social director at the famous Jewish Catskill resorts.

And curiously, Tobias had two brothers, Harry and Charlie, and they were composers too. Here is the lovely cover of a song co-written by Henry and Charles Tobias, Girl of my Dreams.

Getting back to the song that started this serendipitously successful treasure hunt: Di firme Boymvol was a Warsaw clothing store. This song is a two verse long advertisement for its wares, including shirts, collars, cravats, socks for ladies, etc. It would be fun to know if Boymvol paid for this song to be sung in the cabaret (and inserted into the book) or if it was done as a lark, or if Boymvol and Zhelonek were buddies.

Here are the original lyrics to Katinka, a Fox Trot-sky. Note that the poor old-fashioned sap singing about his love fleeing with her dancing teacher doesn't even know the proper name of the dance, "It was that Charlesburg I know" (heh):


Out in Russia there are lots of Russians
and you'll find that each one speaks in Russian
There in Petrograd lived a Russ who had
a Russian maiden who was called Katinka
Then one day she heard about the Charleston
from a Yankee boy she learned to Charleston
She left Petrograd with this Yankee lad
left her Russian sadly crying:

My sweet Katinka oh where can she be?
I loved her so how could she go?
Who thought Katinka would pack up on me?
It was that Charlesburg I know.
She would Kazotsky with me ev'ry day
but she went nutsky for that hey hey oy vey
that hotsky music just led her astray and I lost Katinka that way!

When a Russian sings he sings in Russian
Ev'rything they do, they do in Russian
Patriotic land hard to understand and
when in Rome they even act like Russians
Ev'ry Russian sure loves his Kazotsky
not a one would give up his Kazotsky
between you and me now it's plain to see
why this Russian keeps on crying:

My sweet Katinka oh where can she be?
I'm rushin here I'm rushin there
I see that she pulled a rush act on me,
I'm rushin most ev'rywhere
Fifteen kavotskys she earned ev'ry day
till she went nutsky for that hey hey oy vey
fifteen kavotskys is ten cents a day
guess that's why Katinka's away

My sweet Katinka oh where can she be?
I'm lookin high I'm lookin low
How she could tear up a herring with me
noone could beat her I know
She got those Cossacks to dance in that way
Imagine a Litvak going hey hey oy vey
I lost my hair and my beard's turning gray
since my sweet Katinka's away

Our family has listened to Katinka for many decades - one of our favorite songs to joke about! My mother's 78 recording was broken off in part and we could only hear a portion of it, until my brother discovered a copy in West Sacramento about 30+ years ago.

Saved as a favorite, I actually like your blog!