UPDATE: Added the video, have a listen! I wish I'd remembered to put the fiddle breaks in.

On the sheet music it's called "Oi di liebe." Adolf King was a prolific composer of songs for American Yiddish theater. I would call this particular song cynical but cheery.

This would be a good song for a klezmer band. The words are a little dumb but the tune is good.
Translation from the Yiddish: 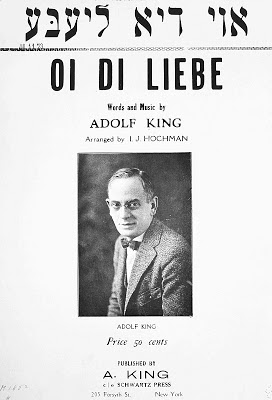 Love is magnificent, love makes people crazy. When love is pure, it's beautiful. It can be foolish or clever. When you love, you feel good, when you don't have love it's terrible, woe to those who don't love. You can be poor or rich, love is for everybody, you're only poor when you can't love.

Oy, love, full of happiness, oy, love, has such strength, It pulls at your heart, it drives you, it creates misery when you're not loved.

An old rich man wants to be clever, he's as rich as Koreh, so why shouldn't he take a young girl, as beautiful as the famous Sarah? Now he feels bad, his money went like the wind, he can't stop wishing... The old guy's miserable. She's playing around with a young guy! Day and night he sings with tears...

People, remember, don't take a false step because later you may regret it. Don't think everything is money, where love is lacking you live bitter years. Don't think money is everything, better bread and salt. I shouldn't give you any hope. Oy, when there's love in the house everything is beloved. Love sweetens peoples' lives.