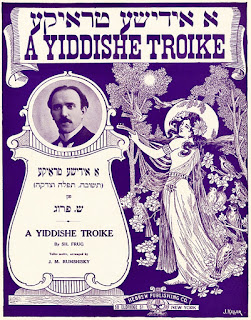 Frug's first language was Russian but some of his Yiddish poems (notably "Zamd un shtern" were set to music and became popular. A Yidishe Troyke was set to a "folk-motiv" by Joseph Rumshisky / Rumshinsky in 1917. I was sort of dumbfounded by the length of this song: 17 written verses concatenated into 5-2/3 sung verses. I can't imagine anybody going on at such length. In fact, Paskal and Schwartz each sing only the first verse as in the original, and they then each have abridged/rewritten the rest of the song to bring it down to three verses.

The song is sub-titled "t'shuve, t'file, v'tsedoke (penitence, prayer, and charity)" those being the three horses that pull the Jewish nation according to this treatise. It wore me out to sing it, now I'm going to have to go eat some ice cream. 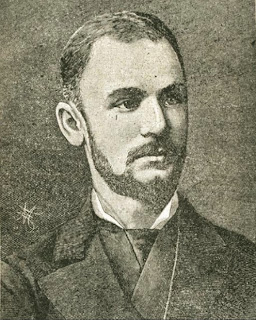 I've run across quite a few recordings by Simon Paskal (also Simon Paskel), who was born in Romania in 1881, but left that country on foot to escape anti-Semitism and reached the U.S. in 1900. He sang in salons and was a vaudeville actor and later tried operettas, but having bombed out as an actor he became a cantor. He died in New York in 1930. You can hear Simon Pascal's version at the FAU site under the unfortunate misspelling: Die Yidishe Toike

My translation from the Yiddish needs some work.


It's been snowing two days in a row, a sled trail has come to life
The horses stand quietly in harness, they're ready to go
Hey, horses! Get ready to go. The sleigh is decorated with bells.
From the side two horses are like a pair of stags
A leopard, a lion in between.
The coachman takes the reins in hand, "OK, children, get happy"
The sleigh suddenly takes off like it's burning. Stand, don't hurry, wait a bit.

No, brothers, it's in vain. Like a bird on the wind from a branch, a whirlwind
They run, they fly quickly,
Always farther, always quicker and quicker
The path through the woods like a smooth ribbon,
The sun shines all around
The coachman, he's a magician, the horses are well-fed
The bells are ringing from far away
Travel, lords, take a drive. Happy days!
But wait - what is this?
Who's creeping along here? Get out of the road!
Here comes the Jewish three-horse troyka creeping along...

A wagon - a palace! The cover was put together
From a full 316 old sticks
The axle stuck together with wax from havdoleh candles
The wheels bound together with string
Three old nags - three eagles! Three fearsome lions
They spring, really like frogs
Israel is traveling, on without end
Home for Shabos...
Home, oh it's so far, the journey is so hard
The wheels sink in mud and diart
Only dry yourself, creep on the gallows!

The wheels are sinking! The branch [he uses the term for a branch that covers the sukka] cracks,
The hinges scrape and creak
Oh no, here's a hole, a sunken place!
He flies and breaks his neck...

But don't be afraid: Israel is well-versed in the waggoner's craft.
For almost two thousand years he's been dragging himself around,
This is always his role... he travels through an ocean of forests and fields,
He wanders through steppes and deserts,
He's already felt and tasted every kind of bitter trouble

He's already encountered the lion, the dogs,
The demons/mockers, and serpents, and robbers,
The breath has already been knocked out of him
The hail has struck him in the face
But it was nothing. Bark, dogs, to high heaven!
His little sleigh goes further, blessed be God!
He lives and travels to this very day
Many sleighs are already crooked, blind
Many bells are broken, many whips torn

Already there is no memory of the dogs that bit him once
Not even the location remains from a thousand ? couriers and knights
And just look, Israel's troyke - it's traveling
It's going farther and farther
The Jewish sleigh - you know it, it's ours
The old Jewish three-horse sleigh - it is:
Repentance, prayer, charity