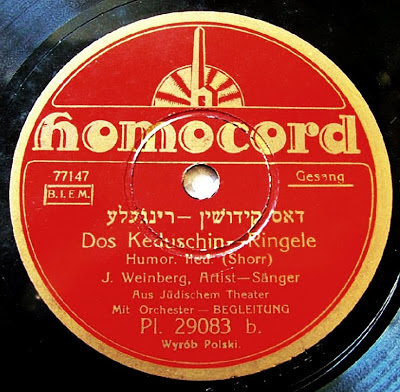 Zhelonek transcribed the words of this song from the singing of Yehudah Grinhoyz, born in 1891 in Bialystok, Poland.

According to the site Russian-records.com, which is where I found the song under the sadly contorted spelling above, it was written by Yiddish dramatist Anshel Shorr around 1926. The Homocord recording is by J. Weinberg.

Here's my own living room recording from three years ago, I'd forgotten I made it:

It was also recorded by "Sem Goldberg, bewuster humorist," as A Keduschin Ringele, on Syrena Grand Record 5459.

I like the tune a lot but find the text aggravating (though I suppose the misplaced impulses it mocks are still common).
Here's my translation of "Dos kedushin ringele"

A maiden's first desire is to get a ring on her finger.
Day and night that's all she thinks about,
because it's a shame to be an old maid.
She'll only be happy when a young fellow loves her and kisses her.
Suddenly happiness - there's a swell of music,
she gets engaged.

A wedding ring and a good-looking boy,
That's what every girl wants.
To one marriage brings happiness,
to another only lifelong suffering.
Therefore, pretty girls, be careful with your hearts
before you take the big gift.
Don't take the ring until you know the boy well
so you don't get hurt.

There was a pretty, genteel girl,
but she didn't obey her parents.
Without asking anybody she took a guy,
she wanted to become a "lady."
She felt she'd gambled away her youth...
She found her match, now she cries and complains
she rushed into it for no good reason;
her husband ran away from her.