Harey at, a Zhelonek song, is found under the name "Ikh ganve in der nakht"

Click the picture to hear (and/or buy) the song as we sang it.

It's not surprising it took a while to find this song - the line which is the title given in the Mlotek's "Songs of Generations," Ikh ganve in der nakht, never appears in Zhelonek's lyrics. (We added the Mlotek's first verse to Zhelonek's version for this recording from "In Odess: Yiddish Songs from Warsaw Volume I"


Click below to watch my Yiddish cartoon music video with the English translation as subtitles: 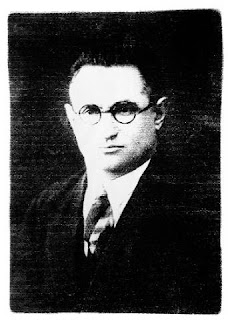 The YIVO Encyclopedia says it was written by Moshe Broderson and David Beigelman and that it's "an underworld duet written for the Ararat theater in Lódz." The gangster underworld captured society's imagination in those days. In fact Urke Nakhalnik (Natshalnik, Nachalnik), left, became the most famous Warsaw Poland mobster of them all because he wrote his life story while he was in prison and it became a huge best-seller and was made into a play and then a musical!

The protagonist first complains bitterly that his moll has been walking out with another guy therefore he threatens to stick a knife in her. She wants to get married and agrees to dump the other guy. He proposes that they go to Buenos Aires together and start a nice brothel.

The Mlotek's lyrics are written for a man and a woman singing to each other. My friend Randy drove up from Florida to sing this song with me for the album.


And here is my translation of Zhelonek's text, plus one additional verse from the Mloteks:

I steal at night, the night is gloomy, black. And you've gotten hold of me
and stolen my heart. If I've stolen, that's good, a sign that I'm capable.
I'm skillful, hot stuff.

No transaction will harm us. We've corrupted everyone in the city. Just play
the role slowly. Say the wedding words to me, Mister.

The night is gloomy, black, you steal my heart
You knocked the wind out of me, you pressed me close
You know stealing is good, it's a sign that I'm good enough
I'm really skillful, the cat's pajamas

It can't be bad from such a transaction
From pomp, we corrupt you, you're turned
Play the role, but carefully,
Just say the marriage vows, mister

This is what Yosele said, that I was a diamond
That he wanted to give me a whole mountain
If I'd give him my hand
What can you do with happiness?
Why won't you leave me alone?
If I had a knife now I'd stick it into her

I steal a diamond and a pearl necklace
But then at last I see you walking with Yosele the modern fellow
What difference does it make? A German, a Frenchman -
From me one can receive a plague with a rose on top

I don't want to go out with Yosele any more
When you and I travel to Buenos Aires,
This is what I think:
You'll be the Madam and I'll be the boss.