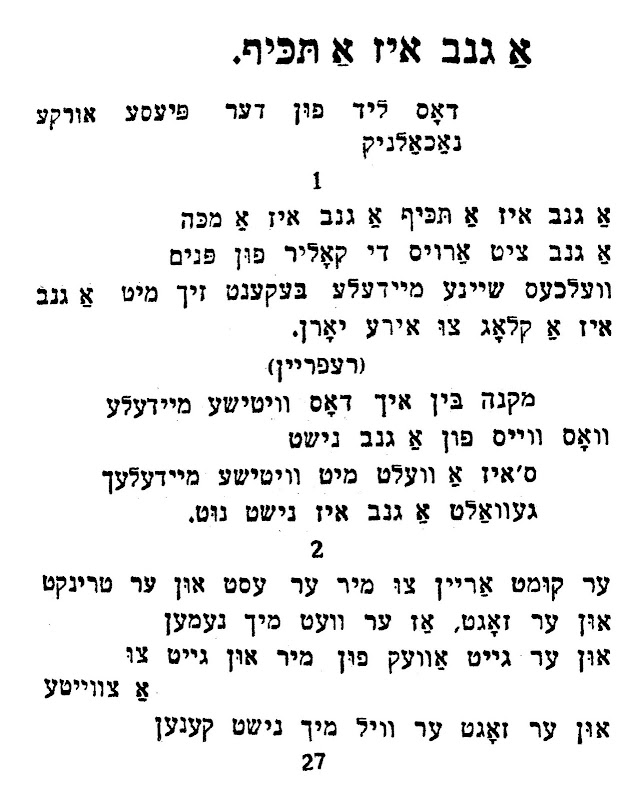 I'm currently going through the photographs I took of the pages of Itzik Zhelonek's little books of theater songs and cleaning them up so they're readable - between the poor lighting in the Chasidic library where I took the photos, and the brown paper they were printed on (well, it wasn't brown then, but it's brown now, and crumbling - almost all of Yiddish literature was printed on terrible acidic paper), a lot of massaging is required.

The cool thing is, Itsik was trying to be right up-to-the-minute, so his songs and monologues are taken from the shows which were popular in the year he printed the books.

This was a 1934 book called Lider far dir far mir un oykh far ir un monologn on a shir which translates endearingly as "Songs for you for me and also for her, and no end of monologues" from his series called "Tashnbibliotek." This particular song is noted as being "The song from the piece Urke Nachalnik." (The title seems to be A thief is very quick (A ganev iz a teykef) but Itzik Gottesman suggests it might actually be A thief is a powerful man (A ganev iz a takif) "

Thanks to google I was instantly able to discover that Urke Nachalnik was born in 1897 with the name Itzchak Baruch Farbarowicz, into a prosperous Jewish family in a village called Wizna. Wikipedia says cryptically that he "became a criminal and then a self made author and ended his life heroically on November 11 of 1939 as a leader of a small underground unit that fought the German invaders."

There is a wonderful article about Urke in Tablet Magazine. Some excerpts:


He moved to Warsaw, where he ascended in the city’s underworld, working his way up from smalltime pickpocketry to well-planned heists of local businesses, and he formalized his pursuit by taking the name Urke Nachalnik, which means “brazen master criminal,” in the lingo favored by Yiddish-speaking Eastern European thieves.

By his mid-30s, he had spent half his life behind bars ... he went to lectures given by Stanislaw Kowalski ... Urke Nachalnik showed up with two novels and part of an autobiography, which kicks off as follows: “Before I begin the sad story of my life I feel bound to give at least a summary of the circumstances that led me away from the straight and narrow. I ask the reader’s forgiveness for first starting with a picture of my entrance into the world.”

[Kowalski] had it published as Zyciorys wlasy przestpcy, The Autobiography of a Criminal ... an instant bestseller in Poland, becoming the most popular book of the year ... the prison authorities released Nachalnik in 1933, two years before his sentence was up.

Nachalnik’s serialized stories of the Jewish lowlife were a huge hit among the Jews of Poland and in early 1934, actors involved with the smallish La Scala Theatre (not the opera house in Milan) decided to stage a play based on his tales.... 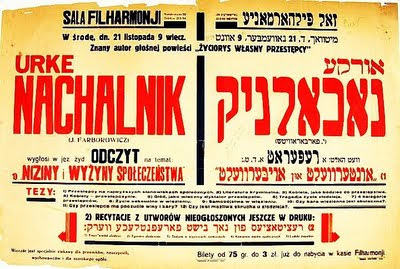 The play portrayed the street life of Jewish pimps, prostitutes, and criminals in its own raw reality ... After packed houses for first performances, the actors and stage-hands showed up at the theater for the third evening to find that all the electrical cords had been cut and all the costumes were missing. Even the set had disappeared. It was a mystery—the theater had been hijacked, but by whom? Gossips in town suggested that members of Warsaw’s underworld were furiously unhappy with the play...

The theater managers didn’t know what else to do and sent for Urke Nachalnik. He made things right; he contacted some of his former cronies and every costume and piece of the set was returned, enabling the show to go on as scheduled.


I don't have the tune for this song (yet!) but you can hear another song, Din Toyre, from the Urke Nachalnik show at Itzik Gottesman’s Yiddish song-of-the-week blog.